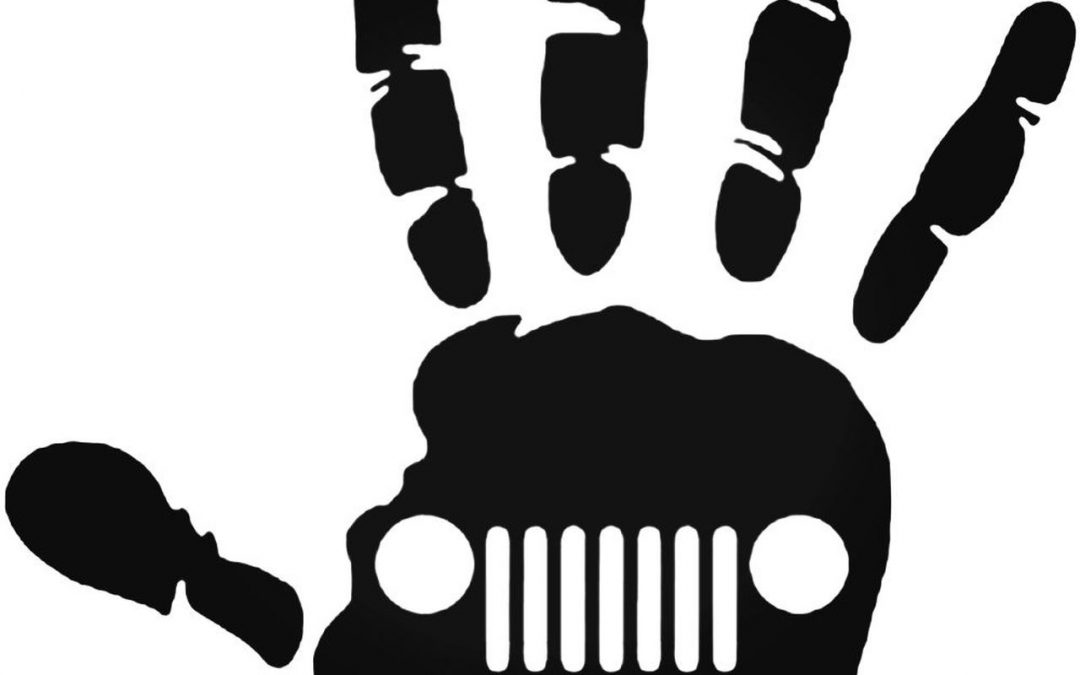 HAVE YOU HEARD ABOUT THE JEEP WAVE?

When we first bought our Wrangler, back in May 2019, I had to share our news. The first thing my brother asked me, “have you been practicing your Jeep wave?”

Ummmmm, no, because I had no clue what he was talking about. What was a Jeep wave? I truly thought he was joking. He assured me that it wasn’t a prank

So I asked Brad if he knew and of course that was a huge yes! (I’ll spare you the emojis, but you can insert facepalm here.) There was no need to practice. He already had his Jeep wave down, from prior year’s experiences.

Nothing stopped him from extending this gesture to other Jeep owners. Not even me saying, “Sweety, they are literally in the far lane on the complete other side of the highway and there is no way, under the sun, they can begin to hope to see you waving.” Nope! Nothing!

I have also been extremely bewildered by the amount of Jeep owners/drivers that do not return his gesture. If this is supposed to be a “thing”, then why isn’t it actually one? Are there that many, like me, who truly don’t (or should I say didn’t) know about this unwritten code?

To the internet I went. With so much information out there, the chances of coming up empty-handed are void. How did we ever survive before Google became so easily utilized?

Of course, Jeep has decided to jump on the wave bandwagon and have implemented a program called Jeep Wave. This is open to newer Jeep owners – 2015 and newer. It also appears to be available to leased Jeeps, although I have no idea why anyone would do such a thing. But that is for another time and post.

SO CLOSE, BUT SO FAR

I wasn’t completely disappointed. My digging got several hits and then landed on the Urban Dictionary. The hope was to find some dated material that spanned farther than the last few short years. Apparently the Urban Dictionary is a “written by you” site, meaning anyone can contribute. I found some input from one such user, Phil Timms, who holds the “top definition” spot, which was posted in 2008 and I found again posted on CJPonyParts website in 2019, in a blog post titled, “The Jeep Wave Explained“.

The Rules of the WAVE

Warning
Owning, registering, insuring, or driving a Jeep implies knowledge of and intent to abide by the following rules. Failure to obey the rules may result in your being ignored by other Jeep owners as you sit along the side of the road next to your stalled vehicle in a blizzard surrounded by Saturns, Yugos, and Hyundais.

An honor bestowed upon those drivers with the superior intelligence, taste, class, and discomfort tolerance (exception to 97 and newer Jeep owners) to own the ultimate vehicle – the Jeep. Generally consists of either a raised hand waving or 4 fingers extended upward from the steering wheel, but may be modified to suit circumstances and locally accepted etiquette.

Top off: One handed wave above windshield or outside body tub.

Top off during blizzard: Shiver and nod, hands may remain frozen to steering wheel.

1. All Jeepers are responsible for upholding the tradition of the Wave. It seems that generally the Jeep Wave is only practiced by Jeep owners driving the following Jeep vehicles; CJ, YJ, TJ, JK.

2. All Jeepers are required to return the Wave even if it’s a Grand Cherokee or Compass.

3. Do not EVER wave to Hummers, even if you know the person.

Guy 1 is driving his Jeep and sees another Jeep so he gives the Jeep Wave. Guy 2 waves back

So we had ventured to the outskirts of Dallas on January 24, 2020 (more details on that trip later) and wouldn’t you know it, but it happened! Time to mark it on the calendar! I saw it with my own eyes! Brad got it! He got a wave back!!